Why Were We Born? What Are We Living For?

Two thousand years ago, Yulia made a pact with Lorelei, the aggregate sentience of a force known as the Seventh Fonon. The result was a prophecy known as "the Score" that records the entire planet's history from creation to death. The Score became the basis of the world's central church, the Order of Lorelei.

In the present day, Luke, the son of a duke of Kimlasca, encounters Tear, a woman seeking to kill his mentor, Van. But when their Seventh Fonons resonate, both are transported to Tataroo Valley.

On their journey home, Colonel Jade of the Malkuth Empire asks them to help deliver an official entreaty for peace. Luke agrees, and travels to the city of Akzeriuth as a goodwill ambassador. Once there, he is tricked by Van into unleashing the power of his hyperresonance, destroying the city and sending Luke plunging into Qliphoth.

There Luke meets a boy named Asch who appears identical to him. After Asch tells him a shocking truth, Luke resolves to atone for his past sins by becoming a different person. 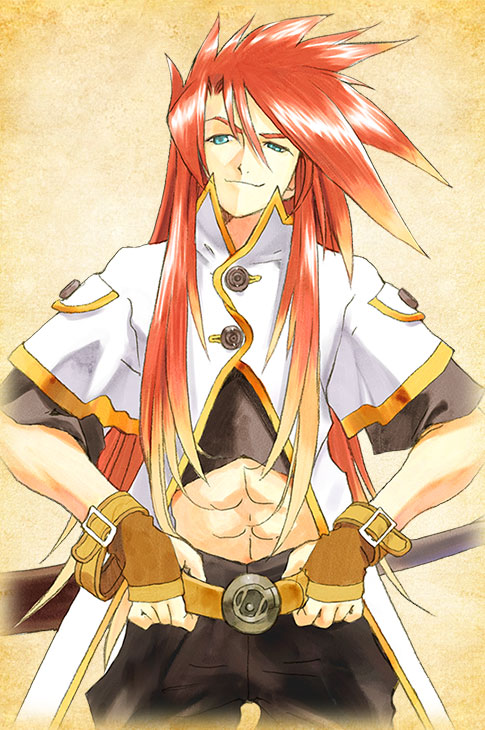 The only son of Kimlasca's Duke fon Fabre, Luke lost his memories as a child. He's since come to trust and rely upon his sword instructor, Van, the head of the Oracle Knights. Luke possesses the arrogant personality one might expect of an only child of aristocrats, but after a life-changing incident, devotes himself to seeking atonement. 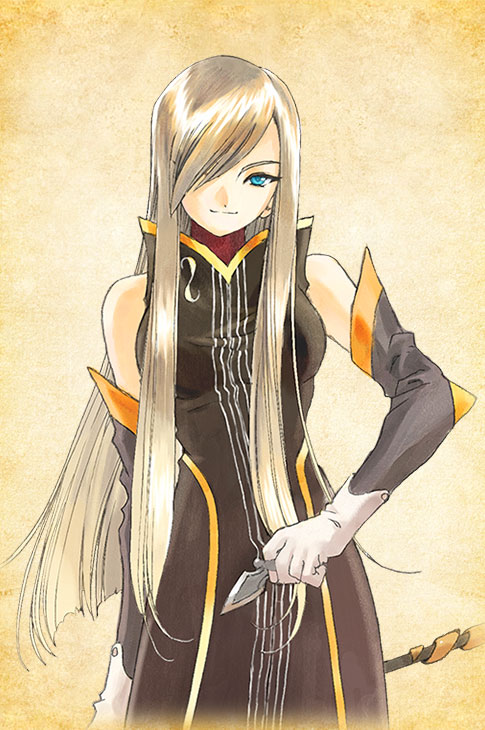 An Oracle Knight and Seventh Fonist, Tear serves in the Score-governing Order of Lorelei. Orphaned shortly after her birth, she was then raised to be a soldier. Reticent and self-controlled, she can come off as icy, but harbors a weakness for cute things. After a certain incident, she joins Luke on his journey. 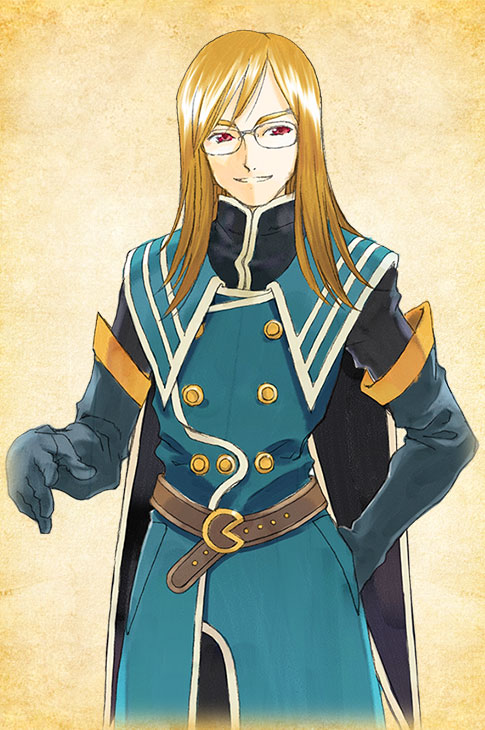 A colonel in the Malkuth Imperial Forces, Jade is an expert fonist who is also skilled with the spear. He is considered to be a close confidant of Malkuthan Emperor Peony the Ninth, but is widely feared as "Jade the Necromancer." He encounters Luke's party while on an official mission. 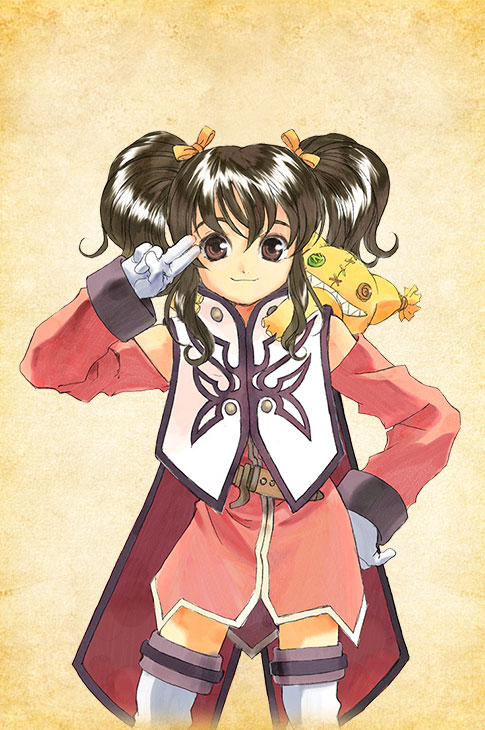 Within the Order of Lorelei, Anise serves as the personal guard of Fon Master Ion. While escorting Ion to Akzeriuth for the signing of a peace treaty, she meets Luke. Greedy where money is concerned, Anise immediately sucks up to the aristocratic Luke, and makes him a target of her incessant scheming. 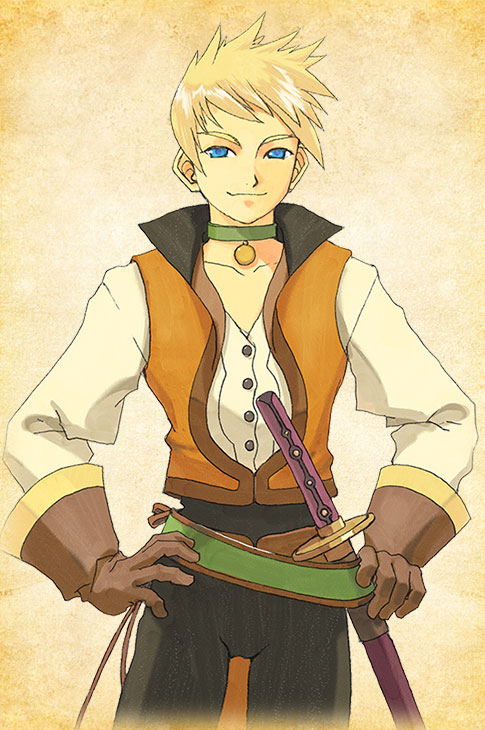 A servant at the Fabre manor, Guy is regarded by Luke as something of a brother figure. He's also a childhood friend of Luke's fiancee, Natalia. Guy loves fonic devices, and always gets excited when the party encounters new ones on their travels. He also has an extreme case of gynophobia, and panics when women approach him. 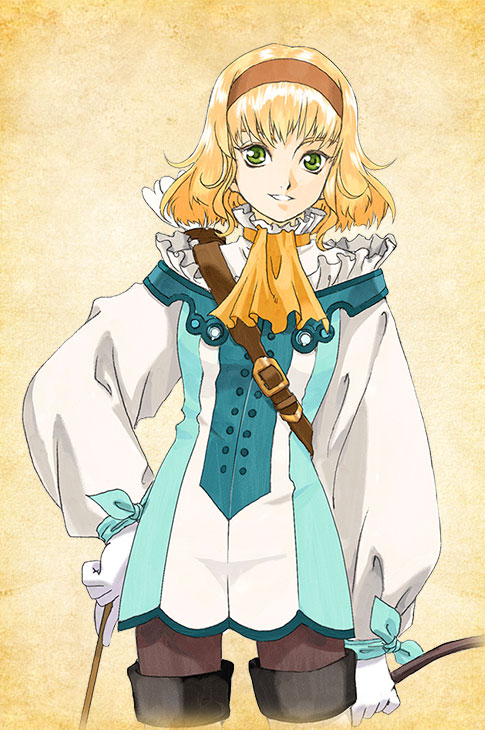 Natalia is the princess of Kimlasca, and Luke's fiancee. Luke no longer remembers her, but Natalia cherishes the words they'd shared in their youth. The princess is genteel but strong-willed, and essentially forces her way into Luke's party. 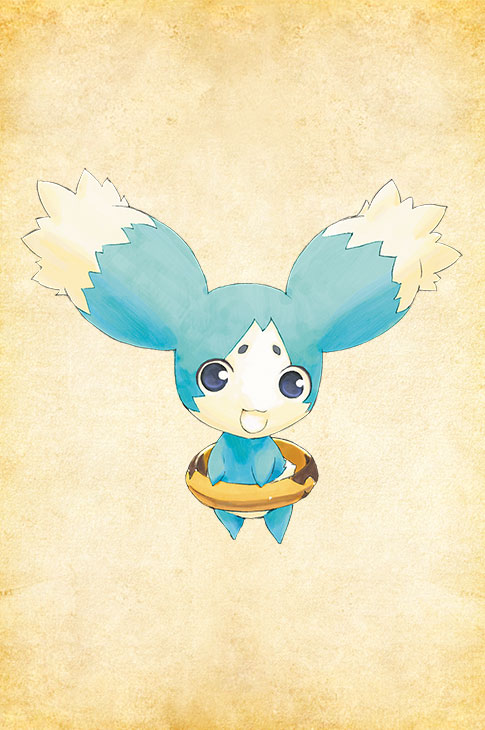 Mieu is a young cheagle, a species considered to be sacred beasts by the Order of Lorelei. After accidentally burning down the Liger Woods, Mieu is ordered by the Cheagle Elder to accompany Luke on his quest. 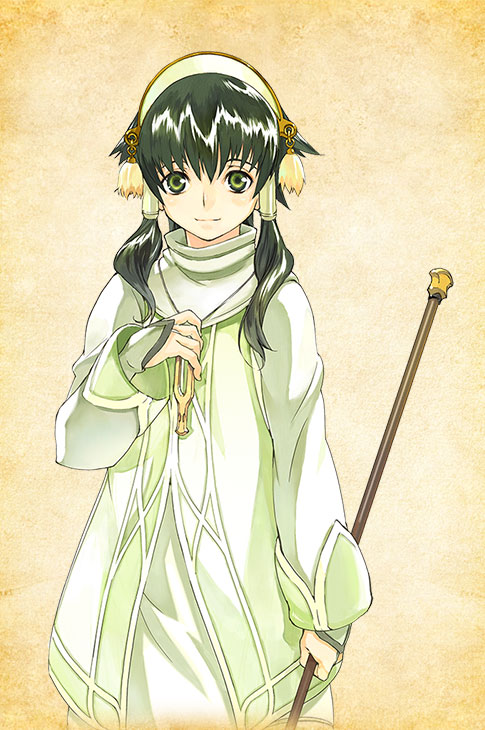 The Fon Master of the Order of Lorelei, Ion is kind and has endless sympathy for others. He immediately perceives Luke's inherent kindness. 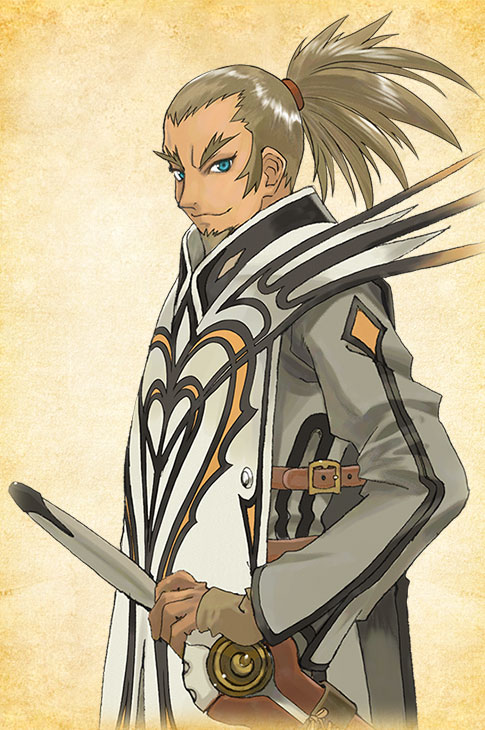 Van is a sword instructor to Luke and the elder brother of Tear. As the head of the Oracle Knights, he commands the six God-Generals. 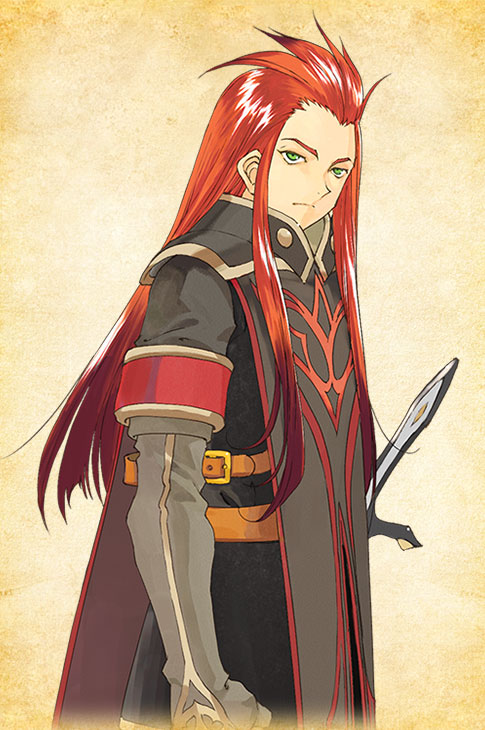 One of the Six God-Generals who lead the Order of Lorelei's Oracle Knights. As the Commander of Special Ops, Asch acts behind the scenes along Luke's path. 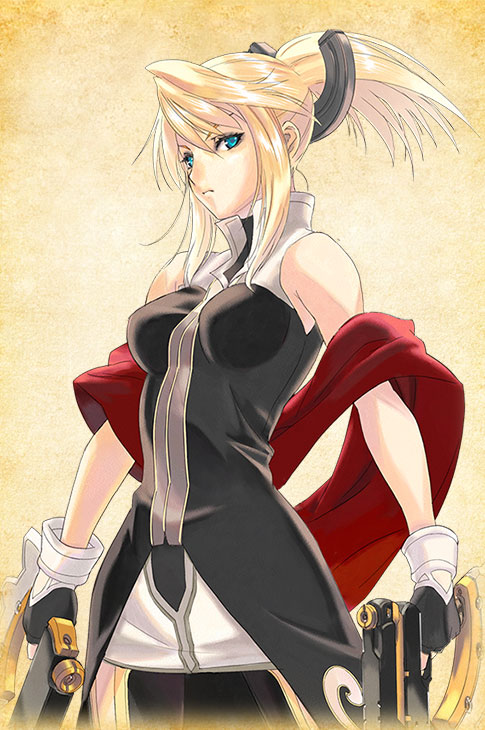 Seeking vengeance for her brother, Legretta attacked Van and failed. To her great confusion, Van then promoted her to serve as his personal aide. As she served him, Legretta found her hatred gradually turning into love for the man, and she now devotes herself to achieving his ideals. 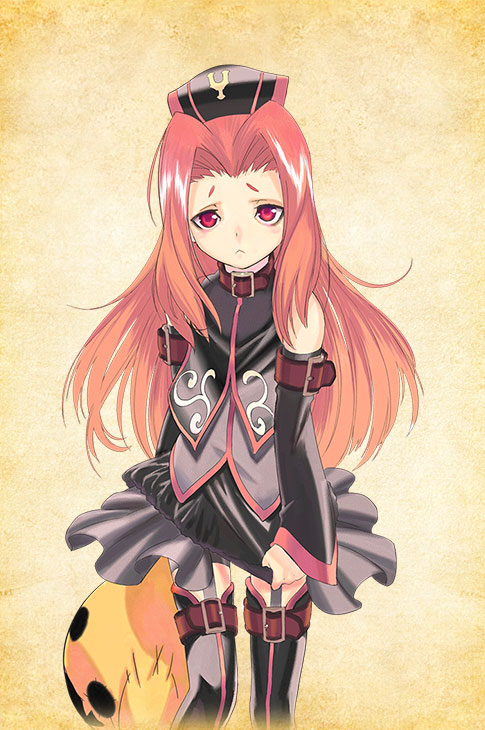 Arietta served as the previous Fon Master Guardian. She loved her charge, Ion, more than anyone, and despises Anise for replacing her in the role. 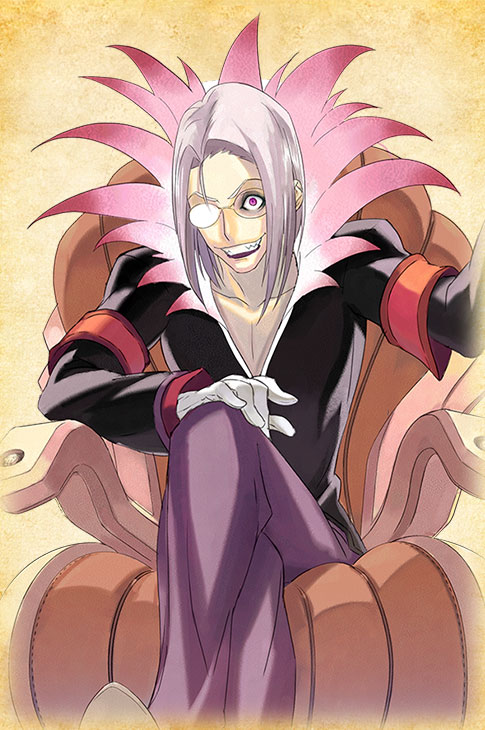 Despite serving as one of his God-Generals, Dist holds no loyalty to Van. His one and only goal is achieving the resurrection of his mentor, Nebilim, as he believes this will cause his childhood friend Jade to revert back to the Jade he remembers from long ago. 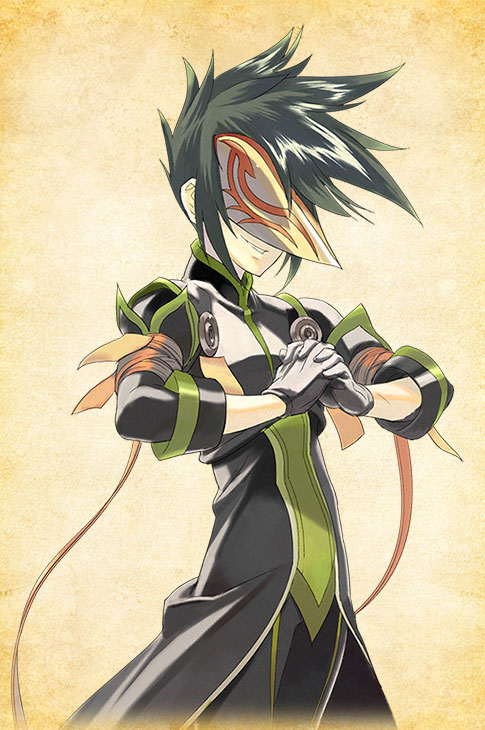 One of the Six God-Generals who lead the Order of Lorelei's Oracle Knights. Sync is a masked martial artist who excels at extremely fast artes. He serves as the group's chief of staff. 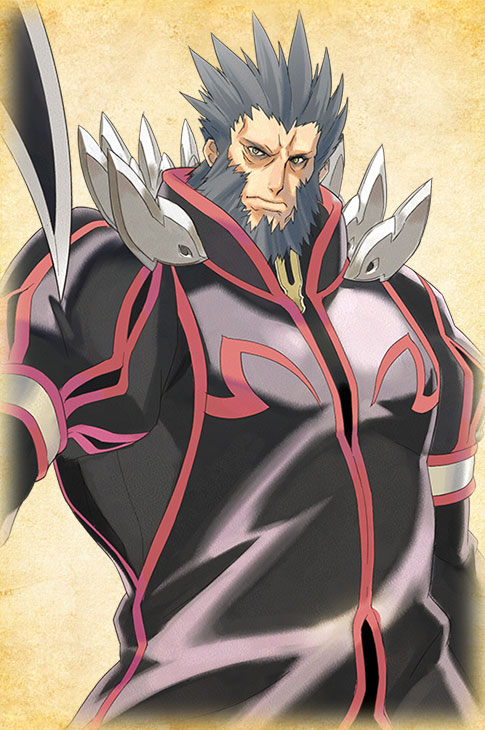 One of the Six God-Generals who lead the Order of Lorelei's Oracle Knights. Huge and muscular, Largo wields a massive scythe and commands the organization's shock troops. 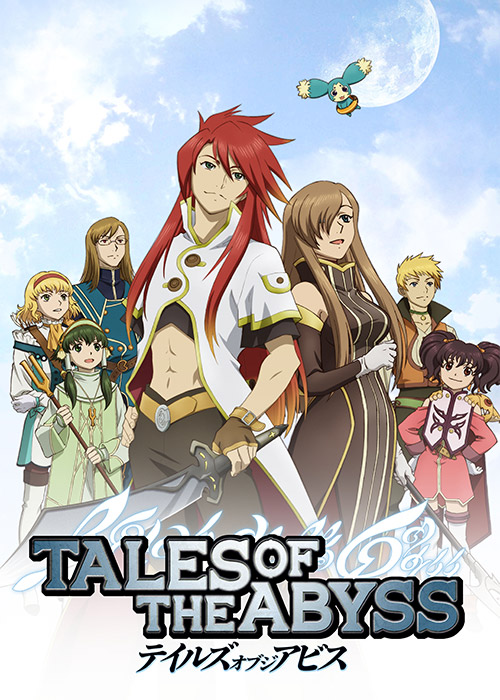 Tales of the Abyss

The animated TV adaptation of Tales of the Abyss.

2,000 years ago on the world of Auldrant, war raged over the Seventh Fonon, which was said to chronicle the history of the planet from its birth to its ultimate destruction. The long war took a toll not just on humanity, but the world itself, as its geological upheavals released toxic miasma into the air.

Yulia Jue, a brilliant fonist with the ability to interpret the Seventh Fonon, succeeded in saving the world by following her version of the prophecy--known as the Score--and sealing the miasma deep underground. But Yulia's greatest achievement was giving the people a reason to put their faith in the Score. The Church of Lorelei was established to protect her teachings, and the people increasingly turned to the church to guide their lives.